Last month, literary agent Rachelle Gardner posted on her Facebook page, “In 20 words or less, tell me about the book you’re writing right now.” Within a day, 87 people commented. And like a person driving by the site of a natural disaster where the earth had swallowed half a house, I couldn’t look away. I read them. All 87. 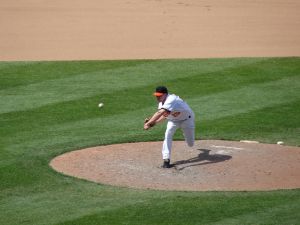 And I saw some great pitches for books I’d read. A couple even made me say, “I wish I’d thought of that.”

Generalize About Your Main Character

Your pitch is the one place where you have permission to use stereotypes. Because of the limited word counts, stereotypes help you get across a lot of information quickly.

And that’s also the exact reason you don’t want to use your character’s name. It tells the reader nothing. They have no reason to care about or be interested in a name. Phil Connors could be anyone. A cynical weather man, however, lets us know right away what we’re dealing with.

If your main character doesn’t appear in your pitch, do not pass go and do not collect $200.

The second key element in your 25-word pitch needs to be the conflict, because without conflict, you don’t have a story. Even literary novels require conflict.

A cynical weather man must live the same day over and over again . . .

I don’t know about you, but living the same day again and again, no matter how good that day, would soon become boring and feel futile to me, and I’d try everything possible to escape.

Your story is likely to have subplots, which means sub-conflicts. Choose the main driving force behind the story. For example, if you’re writing a romantic suspense, your main conflict is going to be whatever threatens the main character’s life, not whether or not she gets the guy.

Another common mistake is to try to include your character’s emotional journey or the theme of your novel in your pitch rather than describing the conflict. Your character should grow and change over the course of your novel, but your plot is the challenge she faces. And theme arises out of the story. It isn’t the story. (Check out Rachelle Gardner’s post on the necessity of conflict when pitching a novel.)

Add the “Or Else” or “So What” Factor

What does your main character stand to lose? Why should they care what happens? If they don’t care, if they don’t have any reason to act, then the reader won’t care.

A cynical weather man must live the same day over and over again until he learns what real love is (Groundhog Day). The consequences are two-fold. Not only would he be trapped in the time warp forever, but he’d also never know love.

A cable repair man must figure out the secret to defeating the invading aliens’ ships before they kill him and his family (Independence Day).

Sometimes the consequences are implied within the conflict. If they are, then you don’t need to repeat them.

What Will You Use It For?

If you were MacGyver, this 25-word pitch would be your Swiss Army knife. You’ll use it at conferences, in query letters, and when creating promotional material for your book after it’s published. You’ll be ready to wow whoever you need to in less than 15 seconds. You’ll also use it to keep you on track while writing the book.

Examples of One Sentence Pitches

I love examples, and find I learn a lot from them, so here are some links to when Randy Ingermanson did a series on his blog analyzing one sentence pitches sent in by aspiring authors.

Characters in a One Sentence Pitch

An Excellent One Sentence Pitch and Why It Worked

Are you brave enough to give it a try and share your 25-word pitch with us? If you already have a published novel out, we’d love to hear yours as well.

A GWP-style Newsletter for Writers

Freelance writer and editor, Great Dane owner, jelly bean connoisseur, and proud wife of a former US Marine. I write fantasy and suspense/thrillers.